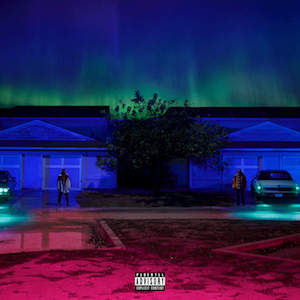 Pickin’ up / friend from brunch / and we’re chores bound.

Today I learned that “pop” rap, for lack of a better term, is about 60% up my alley.  I enjoy it enough to not ask someone to turn it off, but not really enough to choose over other artists.

I’m a big fan of the rhythm implicit in “rhythm and poetry,” and that’s what I think the biggest fault of the album.  Even otherwise stellar guest spots, such as the reliably awesome Eminem’s, feel like they’re stumbling in places.  This perceived inability to stick to a meter irks me at best, and at worst is an outright deal-breaker.  Here it was more irksome than over-and-out.

The productions are all over the place: from poppy beats, to giant uplifting beats, to trap flavored beats.  There’s enough of a through-line for the album to not feel disjointed, but there were a moment or two that felt relatively uninspired.

Those moments are relatively few and far between, which is nice.  When Big Sean is at his best are the moments when he’s playing the role of motivational speaker.  Songs such as “Inspire Me” and “Sacrifices” where he’s giving advice and is being grateful for how far he’s come in his career.  These uplifting moments are not only his most sincere feeling, but also among the catchier tunes in the album.

I’d rank this a few degrees higher than that French Montana album I reviewed a while ago, but I’m still going to default to Vince Staples and Chance the Rapper for the time being.  Let’s call it a solid C?  An unenthusiastic but still passing grade.  However that math works out.