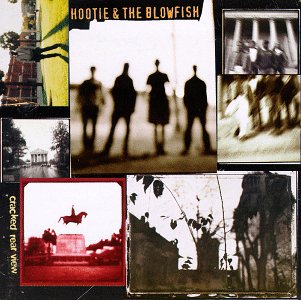 Today I dig deep into the dark, dark world of mid-nineties mediocre alternative music.  Hootie who?  Hootie and the Blowfish, that’s who.

No one in this band is named Hootie, as far as I can tell.  So that’s strike 1.  Maybe even strike 2.  One for lying, and two for leading me to believe someone was awesome enough to call themselves Hootie.  Strike 3 comes about 45 seconds into the first song when you realize what this band is about.

And it’s a real shame because the singer has a voice behind him, but not one that’s being particularly serviced well.  Being a second best guy from Pearl Jam still puts you in good company, but it feels so misapplied here.  Like if Celine Dion tried her hand in a punk band, or something.  Undeniable talent in an undeniably poor choice of background.  Wikipedia tells me the singer has since gone solo and is maybe singing straight-up country music now?  I may have to give that a go later, that could be interesting.

But talent aside, this style of singing has been forever ruined by Andy from Parks and Recreation, who’s hit song “The Pit” replaces all of the lyrics as soon as I hear this timbre in a voice.  Now that I listen back to “The Pit”, the instrumentation is pretty spot on as well.  So much chorus on that guitar, god bless ’em.

But Hootie and the Blowfish is not interesting beyond being in the soundtrack for [insert some 90’s nostalgia here].  If you can pull this off at karaoke more power to you, I will mostly likely raise my glass to you and sing sloppily along.  But I’ll still mock you in the morning for your piss-poor choice of karaoke song.  Sing the Barenaked Ladies or something, gosh.

Hootie and the Blowfish, music