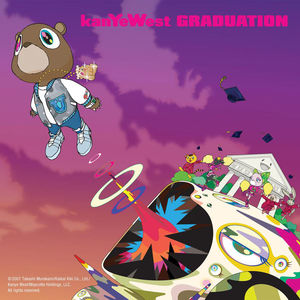 Context – holding down the fort

Today I had one email to send.  It was very important, and I’m glad I was here to do it.  But I’m also so tired I don’t know why I didn’t just nap instead.

Instead, I listened to the final installment of the trilogy started with The College Dropout.  Graduation is a big step up for Kanye, but fails to capture the magic of The College Dropout.  This album sees a formal departure from the R&B and Soul based productions of his first two albums, and here we really see Kanye ascend to the next level of his production and rapping talents.  There are synths on this album.  A wild Daft Punk appears.  T-Pain teaches Kanye how to auto-tune to a mostly success.

Plus, the singles are dope and pound for pound some of the better singles of Ye’s career to date.  “Stronger”, “Good Life”, and “Flashing Lights” all live rent-free in my head and have been doing so for a decade, apparently.  Because that’s where I’m at in my life–the place where time is starting to be measured in decades (it’s an alright enough place to be, I suppose).  With the exception of “Gold Digger”, I’d put any of these singles against anything on Late Registration.

His flow is strong and his lyrics are clever, but ultimately forgettable.  Kanye falls into the trap of hip-hop by trying to maximize the amount of time he spends on the CD with this album clocking in at 51 minutes.  I feel like this is tighter than his other albums–there are no skits and interludes slowing down the momentum of the album (a convention of hip-hop I’ve never really understood or appreciated)–but it could still use some tightening or cutting down.  Tracks like “Barry Bonds” and “I Wonder” seem unremarkable, but that could be due to their placement next to stronger tracks.

This is a solid C+ kind of album–super strong singles, pretty decent supporting tracks, caveats to be had throughout.  With a little more cohesion and better placement in his discography, this could be a great album.  Like if this group of songs were released as the second part of the trilogy–we see some growth, some experimentation, but clearly a transitional album–and then Kanye ended the trilogy strong, that would be something.  But as such the only truly stellar moment of the trilogy is The College Dropout.

I’d be interested in (and, at a later date, probably will be) listening to these three albums with the lyrics printed so I could follow along more readily to see how this holds up as a cohesive trilogy.  I’ve gotten really bad about listening to lyrics, but as far as I can tell there isn’t much of a story going on, and the themes seem to be about the same.  I could be wrong though, hence the need for extra scrutiny.

As such, the standings are as follows: