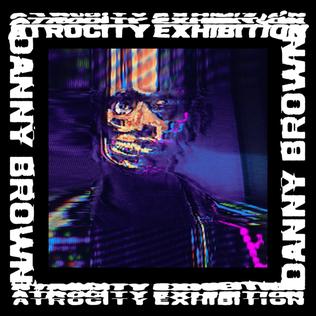 What a weekend, filled with whiskey, writing, and wishing I didn’t drink so much of the whiskey.  And Jupiter Ascending, which is one of the most stunning movies despite it’s complete lack of a serviceable plot.  What a shame.  What a shame.

The driver of the expedition brought Danny Brown’s Atrocity Exhibition to my attention during the trip, and boy howdy am I glad he did.  This is some of the weirdest shit I’ve ever heard.

Atrocity pulls of the difficult task of keeping each track fresh and 100% it’s own thing while also keeping the overall feel of the album tight.  He bounces spasticly from trap music to disco to Solange samples effortlessly, adding his own disjointed spin to everything he touches along the way.

His trap songs are fragmented and unique enough to not get on my nerves–as soon as I’ve reached my threshold for trap on tracks like “Pnemonia” he starts adding his staccato flavored stuttering to help break it up and take the song in a novel and exciting direction.  The actual sound of Danny Brown’s voice can be grating sometimes with his comically high pitched voice, but he seems so damn excited you forgive him for this pretty quickly.

I have no idea how he dragged me along for this wild ride through his creative process, but I’m super glad I did now that it’s over.  Super glad.