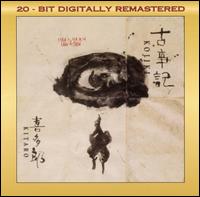 Today has been a doozy.  Organizing translators.  Arranging meetings.  Missing out several times on grabbing a Nintendo Switch.  I am ready for the weekend indeed.

I’m not really into world music, although I can and do appreciate it when I’m exposed to it, as happens from time to time.  Nothing personal, but I have enough of a backlog on artists I’m currently interested in to be digging into artists from other countries on top of it.  A buddy of mine suggested I listen to Japanese artist Kitaro’s album, Kojiki as part of this project, though, and while I was initially hesitant to take him up on it, I was curious enough that I started the journey.  And then eventually 46 minutes had passed and the album was over.

The only point of reference I have for this is the score of Final Fantasy X, which is one of my favorite videogames.  The arrangements and instrumentation is very similar, which makes sense considering FFX’s traditional Japanese inspiration.

Kitaro begins the album, as best I can tell, supremely rooted in this tradition.  And while the album does stay on message, as it were, throughout the entirety of the project, by the end I noticed he was incorporating more modern sounds, particularly in the bass and percussion.  This opened the music up a surprising amount, but didn’t do much to change my impression of it.

I will never complain if this music is on or used as the score to a movie or videogame.  I would encourage people looking for this kind of music to look into Kojiki, as it seems to do just fine.  For my own use cases and enjoyment, however, I think I’ll stick to what I know.