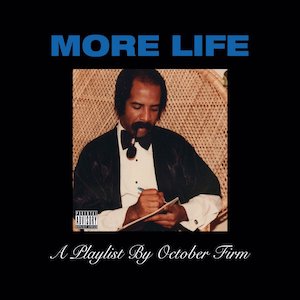 Context – driving my dog to and from the vet

Goes way too long like Duck Dong and sing-a-longs

Still a small world in the after all wearin’ overalls.

I need to give my ghost-writer a raise my shit is on fiya.  Drake makes the same joke (or close enough to) on More Life so I guess it’s not too soon.  Or too late.  Or too anything.

Drake sounds like you think Drake sounds.  I had something more thoughtful planned to say about all of this but then my Spotify made itself “Shuffle” somehow so I have no idea which song I was listening to when or if I even technically heard all the songs on this album.  I could sum this up by saying “Drake is like a Stockholm Syndrome rapper–when you start the album  you’re not sure if you’re into it and can’t wait to turn it off but 15 tracks later your head’s bangin’ so I guess he’s alright.”

He’ll probably win Album of the Year for this because that’s how life works sometimes.