Just got back from the first bike tour! Well, I got back last night.  Three days out to Madison, one day of hanging with some friends, three days back to Chicago. Top 5 vacations, easy. 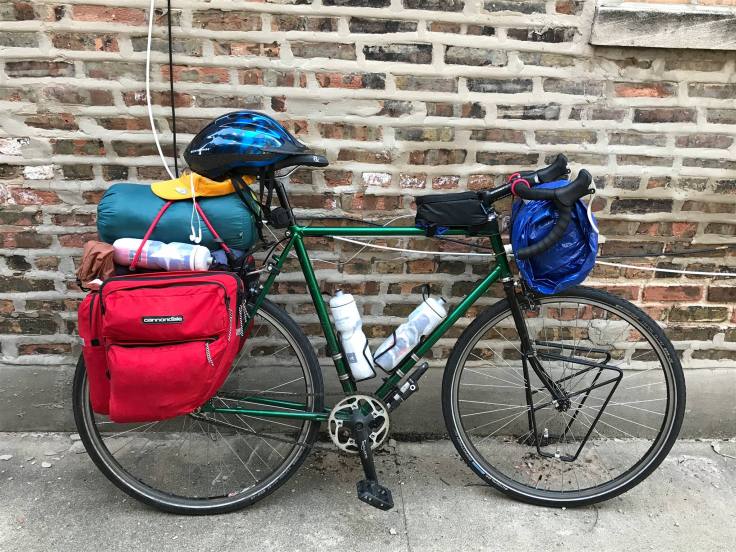 Day 1 (Chicago to Chain O’ Lakes State Park, ~62 miles): My bike is loaded, my belly is full of breakfast, and it’s time to embark on the journey! I hadn’t had a chance to get chamois butt’r before my trip, and after trying 4 different bike shops the night before I had to leave without. After striking out at Walmart and another bike store in the morning, I finally found a store that had some and my butt has never been happier.

It was an uneventful ride until I got to a part of the Des Plaines River Trail that had flooded, and rather than back track I decided to yell “FJORD!” and pedal through it. The water only came up to about the bottom of my panniers, so my stuff was plenty protected. My feet were thoroughly soaked, though. Shout out to Darn Tough for making socks that dry out quickly enough for me to wear again the next day–I’m usually the kind of guy who will go through 2-3 pairs a day if you let me (I despise wet socks), so these were worth their aggressive price tag just for that alone.

I also left one of my books at a Starbucks and didn’t realize it for about 20 miles. I only had one chapter of it left, as well. Booo. Glad I brought Harry Potter and the Goblet of Fire as a backup book.

When I got to my camp site, the camp host stopped to talk to me about bikes and first aid for like, 2 hours. He was a wealth of information, it was good to talk shop for a bit on the first day of my journey.

Day 2 (Chain O’ Lakes to Kettle Moraine South, ~54 mi): The camp host from the previous night showed me a shortcut out of camp that took me through a local subdivision. Stopped for pancakes at a diner in Lake Geneva (can’t remember which one), and probably ate too much.

Toward the end of the day I almost got hit by a car through a combination of not checking all of my blind spots, a lack of visibility as I was turning left during a bend in the road, and my utter exhaustion keeping me from moving my single-speed fast enough out of the way. I took a break shortly after to rest up to not go through that again (I can report back that this was the only close call).

Like a noob I made my route from Chain of Lakes to “Kettle Moraine South Headquarters”, so after ~45 miles of riding uphill into the wind I arrive and learn that this location isn’t a campsite, and I have ~10 more miles to go. Because of course I do.

Day 3 (Kettle Moraine to Madison, ~57 mi): Probably the least eventful day, but easily one of my favorites. I’d guess 50 miles of the day’s ride was on the Glacial Drumlin Trail, which is a gravel pathway that cuts across Wisconsin. Just loaded up some podcasts and rode until Madison.

I did lose control of my bike coming out of a Walgreens in Madison, though, and cut up the back of my ankle on my pedal. That wasn’t fun. But as that was the worst of it, I’m going to call the day a success.

Day 4 (Chillin’ in Madison, 0 mi): A lot of eating, drinking, laughing, and 1998’s Wild, Wild West were had, and it was glorious. Learned I am bad at Taste of [City] events, as after walking through the Taste of Madison we decided to get tacos at a nearby cantina instead. A+ would recommend.

Day 5 (Madison to Kettle Moraine, ~60 mi): Same deal as the way in, Glacial Drumlin or bust. I was a bit nervous about where I would be staying, as it was technically within Labor Day Weekend and I wasn’t able to reserve a site since I didn’t want to book one for the whole weekend. I called the camp during lunch and they said they had some walk-up sites still available, and even if they didn’t they don’t turn away bikers and hikers and would let me pitch my tent in a field somewhere. When I arrived I got the last campsite available and read Harry Potteruntil I passed out.

Day 6 (Kettle Moraine to Chain O’ Lakes, ~46 mi): I took a more direct route instead of going wide, which shaved about 10 miles off my day, but also put me through some more intense hills. Had to push up my first hill as it was pretty steep, and although I had conquered similarly sized hills earlier in the day, the shoulder disappeared and several cars passed me closer than I was comfortable with, so I just took the safer option.

Day 7 (Chain O’ Lakes to Chicago, ~59 mi): Easiest day of the trip, by far. No hills, wind at my back, smooth sailing. Well, pedaling. You get it. Finished Harry Potter at lunch.

I did see a hawk hanging out on the trail, just kind of walking around. As I rode past it (slowly) I noticed it was picking at something, so it must have been finishing lunch. Still intimidating as anything else to come that close to a hawk.

I stopped at a grocery store and bought a rotisserie chicken and a half-gallon of peanut butter cup ice cream for dinner, then spent the evening with the wife and dog.

Overall very happy with how the trip turned out, and sad I don’t know when I’ll get to do it again. I’m sure the opportunities will present themselves as time goes on. I was blessed with no rain and no flats, so it was about as good a first trip as you could hope for.

Oh yea, and this Logic album is pretty good.  People much smarter than I, who have been paying more attention than I have, will be able to tell you more about him and the significance of his recent work and performances.  I’ll just let you know I probably mostly agree with the hype train around this guy.