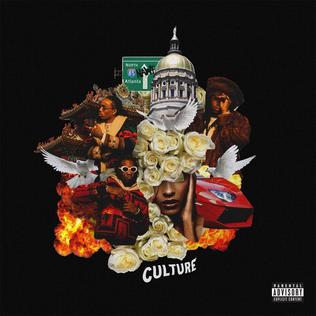 So why not take a gander into what’s trending on Spotify?  The number 1 track in America is “Bad and Boujee” by Migos (featuring Lil Uzi Vert), so let’s see what Migos brings to the table.

I don’t like trap.  It’s not my thing.  But all the same, this is an objectively good album.  The production is tight.  The flow is on point.  The features are relevant.  The lyrics are sometimes entertaining, but mostly about strippers, it would seem.  But we somehow have the opposite of a thing I’m into.

It’s like a reverse martini.  A dirty gin martini is delicious, despite the fact that I disapprove of olives or gin being anywhere near and/or around my mouth.  You know, for religious reasons.  But in a dirty gin martini the negative qualities of the ingredients wash away.  So I need a drink that does the exact opposite, and will ruin everything I love about 2 independently awesome beverages.  Who wants to help me find a way to ruin whiskey?

This is what’s so interesting about rap to me these days–there are some real sub-genres forming under it’s broadening umbrella.  Or at least they are now finally coming through to the mainstream.  The rap my brother likes (trap, lean) is not the kind of rap I like (gangsta, conscious).  When we hang out we’re both constantly competing for control of the radio, him in an effort to avoid me putting on metal for funsies, me in an effort to show him I can be hip to the cool kids lingo.  We agree that Chance the Rapper is the bomb dot oh em gee, though.  But that could be native bias due to our living in Chicago and it’s surrounding suburbs.

My brother would be super into Migos, if he isn’t already.  I am not.

It’s something to do with their use of high hats and the general pace of their productions.  I can’t dance to it, I can’t really bop to it, I can’t groove to it.  It just kind of exists, grating against my ears.  I’m not 100% sure how to digest it.  This kind of scenario is where my aging years begin to show–I don’t understand what the kids like about this.  And adults.  I’m sure there are some adults into Migos.  But rap is a young man’s game, said someone somewhere I’m sure, and I am rapidly exiting young man status.

So if you like the general direction rap has been going since like, 2014, then Migos is for you.  They could be the best at what they do, who knows.  I don’t.  I just know this isn’t for me.