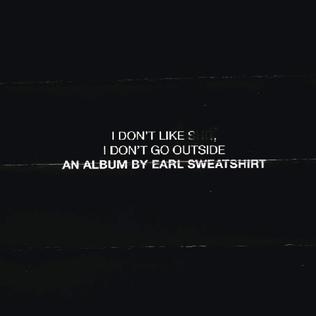 I fucks with the title of this album.  The actual album is pretty good too.

As a huge fan of Vince Staples, it was only a matter of time until I stumbled my way onto Earl Sweatshirt.  Vince and Earl are tight, and their styles are very similar–dark, heavy beats under thoughtful lyrics full of tongue twisters illuminating a grim life that is far from my own experience.

I don’t know if it’s that proxy-escapism, the simultaneous laid back but still sharp delivery, or the unique instrumentation that appeals to me, but whatever it is still works on this album.  As of now I am not over this sound.

The one thing I’d knock both Vince and Earl for is their lack of variety:  Earl’s previous album, Doris, runs a little long, as does Vince’s Summertime ’06.  It’s hard to maintain quality when you cram your album with an hour plus worth of material.  Take the advice I don’t follow myself and edit.  Kill your darlings.

I Don’t Like Shit doesn’t fall into that trap coming in at a mere 10 songs, clocking in at approximately 30 minutes; nothing really sags and everything feels like it belongs, if only in some vague way that I can’t articulate at the moment.  This is the perfect amount of Earl Sweatshirt, especially considering the whole time I was listening to this I kind of wished I was listening to Vince Staples.

As such, I’m not sure how much of Earl’s music I’ll search out–I’ll just keep listening to “Hive”, “Mantra”, and I don’t know–maybe “Inside”?  I’m bad at track names, especially since I mostly just put these albums on in the background and forget to check when I find a thing that stands out.