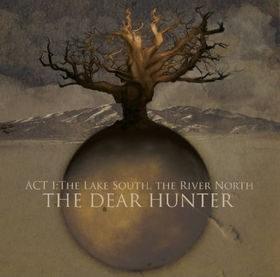 Next month I’m going to see Coheed and Cambria perform their second best album, Good Apollo I’m Burning Star IV, Volume 1: From Fear Through the Eyes of Madness (wordy much, Claudio?), which is a thing I’m very excited about.  The opening act (or one of the opening acts? I’m not sure) is a band I haven’t heard of before, The Dear Hunter.  I thought now would be as good a time as any to look into their music.

When I checked their page on Spotify I noticed a few things:

So I decided that the rest of the week will be going through Acts I-V, and maybe the collection of EP’s comprising The Color Spectrum.  Maybe.  However given the context in which I listen to albums, I will likely not be commenting on the story elements at all.  God knows I barely understand Coheed’s The Amory Wars, and I don’t need to load up that much on another mythos right now.

First things first: Act I is a pretty solid album.  It’s overly ambitious, which creates some rough patches or less-than-smooth transitions, but the elements that stick the landing work extremely well.

The album sets up its intentions in the first song, “Battesimo Del Fuoco”, which is a complex montage of vocal harmonies that lets the listener know off the bat that this is serious, ethereal, and complex.  I liked it, but this is one of those “rough around the edges” moments as I don’t know exactly how to contextualize these sorts of things and don’t know if he’s being cheesy or enigmatic.

Act I opens up during the third track, “City Escape”, which reminded me of something The Sound of Animals Fighting.  I fucking love The Sound of Animals Fighting like Facebook Fucking Loves Science, so this bodes well for me.  All of the interesting bits of The Receiving End of Sirens breaks out of their screamo roots here, and my belly is all-the-more content for it.

The next turn comes a few songs later when “The Pimp and the Priest” takes on a carnival-esque waltz.  Although after this final bout of experimentation the rest of the album appears to be ballad-focused songs of sombritiy and woe.  Or at least that’s the impression I get.

Act I: The Lake South, The River North has enough going on with it that I’m more than willing to keep going on this journey, even if I wasn’t pre-determined to do so at the onset.  There’s a lot here to like, but enough to be desired to keep this from being a truly great album.  If The Dear Hunter can stick more to the frenetic melodies of “1878” and “City Escape” and improve upon these impulses, I could fall deep down this rabbit hole.

I’m also interested in giving this a few more go’s to see how the concept of the story goes.  I hope to god they don’t pull a Coheed and start introducing the author of the tale as a meta-commentary on the anxieties the creative force espouses in their real life, as that gets real old real fast.  Meta can be done well, but when you have a world and mythos as rich as The Amory Wars I feel this gambit detracts too much from the story–I was well interested before you got weird.  It was weird enough without you getting weird.

So stay tuned for a long hard look at a band that seems to be too prolific for their own good.

Act I: The Lake South the River North, music, The Dear Hunter