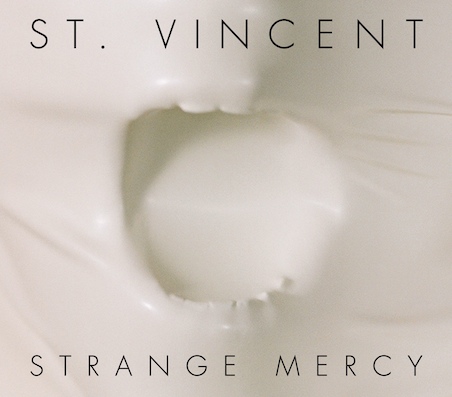 Guys, I love St. Vincent.  I love her style.  I love her music.  I love her signature guitar.  I love the way she laughs.  I spent a good six months relatively obsessed with her, because she’s fabulous (if you think my gushing about Modern Baseball got obnoxious, you should have been around for the St. Vincent days).  I’ve been waiting for her new album to come out and can’t seem to find concrete information about it’s expected drop date, although in my defense I’m not looking very hard.

Today I got two pieces of disappointing news regarding St. Vincent.  The first came in form of my friend, who asked me nonchalantly this morning if I ever heard her music.  Motherfucker I’m pretty sure I’ve played her music for you several times.  Also see the above paragraph.

So I decided to give Strange Mercy an official listen today in honor of my friend’s not paying attention to my life.  And while pulling up her Wikipedia so I could get the cover art, I noticed several news stories from earlier today about her upcoming tour.  I get to see St. Vincent live, you guys! This is great news.

Except she isn’t coming to my city, which is lame.  LAME.  I’m fairly certain I will need a new keyboard as I have thoroughly cried all over this one and this shit ain’t waterproof.

Over-dramatic reactions to bad news aside, I’m pretty sure my talking about Strange Mercy here is a cheat because I don’t remember if I’ve listened to this album or not.  I don’t own it and I haven’t blogged about it, so I’m going to keep assuming this is a fresh listen.  The reason I’m worried I’m cheating is I know a lot of songs off this album.  “Cruel” is one of my favorite songs by her (and one of my favorite guitar riffs ever), I know I’ve seen performances of “Chloe in the Afternoon” and “Surgeon” from some in-house thing hosted by a radio station or something.  “Year of the Tiger” may have been in that list as well, may have just been a music video I’ve seen before.

Either way I love all of these songs–this is probably my second favorite St. Vincent album.  Although I did like her self-titled a bunch, I’ll have to go song for song there.  Actor is still the best of them, but that’s probably in no small part because that’s my favorite of the two of her’s that I own so it gets a lot of play at my apartment.

What it all really boils down to is I just want more St. Vincent in my life.  So lets make that happen, ok?