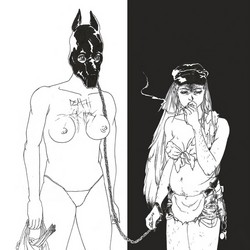 Death Grips is to hip-hop what NAILS is to metal, although a bit more experimental.  Both bands create engaging approaches to their respective genres, but push the boundaries in terms of aggression and raw animal magnetism.  Death Grips challenges all of your pre-conceived notions of rap, although upon a first listen this reputation seems relatively limited to their production style, which can only be described as “balls to the wall”.

Overall color me impressed, I’ll definitely be looking into more albums by this band.  There’s something here that I found engaging despite my limited interaction with the band.

I mean, it’s no NAILS, who hit like a ton of bricks and then collapses on you like you’re trapped in a basement poker game during a building’s implosion.  I think with Death Grips there’s a lot “more” to unpack due to their blending of genres–there’s a punk approach to electronic music that drives a lot of what’s going on in The Money Store.

I wish I had more to say, but my brain has been hella foggy as of late.  Here’s to hoping I’ll have more brain space after I do the wedding officiating thing over the weekend.